Pittsburgh – Energy Secretary Dan Brouillette stressed the importance of the energy industry to the national economy when business and labor leaders from Pittsburgh Works Together welcomed the cabinet secretary to the region.

Energy is roughly eight percent of GDP in the United States, Secretary Brouillette said, but it is the first eight percent. Everything else flows from that. 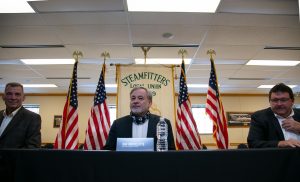 While on his two-day visit to the Pittsburgh region, Secretary Brouillette toured the Shell Ethane Cracker Plant in Beaver County and met with researchers at Carnegie Mellon University. He also held a roundtable with directors of Pittsburgh Works and others at the Steamfitters Local 449 Union Hall. Included were co-chairs Morgan O’Brien and Tom Melcher, business manager for the Pittsburgh Regional Building & Construction Trades Council.

At the Pittsburgh Works roundtable, the participants discussed the region’s natural gas resources. They covered the regions's diverse research capabilities and manufacturing advantages, and how these will surely play a critical role in energy's future. Secretary Brouillette pointed out expanding the use of clean-burning hydrogen as an alternate fuel, as one such example. This will require development of new technology and materials to stand up to the fuel’s corrosive power.

Secretary Brouillette also praised the business-labor alliance at the heart of Pittsburgh Works. Many regions focus on college-trained engineers and scientists, which are important to the energy industry, he said, but having a robust pipeline for a full portfolio of workers is just important.

“We appreciate Secretary Brouillette spending so much time with Pittsburgh Works representatives to discuss the country’s energy future and the role we can play,” Pittsburgh Works Executive Director Jeff Nobers said.