The Ohio River Valley Institute claimed that 22 counties at the heart of the shale economy in Pennsylvania, Ohio, and West Virginia had only seen their jobs grow by “a paltry 1.6%.”

In truth, by choosing data from a source that does not track entire categories of employment, ORVI failed to count 10,000 new jobs created in those 22 counties.

The Ohio River Valley Institute had to withdraw its original Feb. 10 report and re-issue a revised version on Feb. 12 after questions from Pittsburgh Works Together about data discrepancies. ORVI said the re-issue was necessary “to correct a data transcription error that did not significantly affect the findings.”

The re-issued report included changes to the numbers for total employment, population decline, and the size of the regional gross domestic product, three of the four data sets that were used to justify the report’s conclusions. The re-issued report, however, did not address the undercount of jobs.

For most of its report, The Natural Gas Fracking Boom and Appalachia’s Lost Economic Decade, ORVI used data from the U.S. Bureau of Economic Analysis, a branch of the Commerce Department. But for job numbers, the report used a U.S. Labor Department data set that excludes, among other things, the self-employed and sole proprietor businesses.2

In other words, exactly the kind of jobs one would expect to be created in a rapidly growing new kind of economy.

Imagine a woman who starts using her own truck to haul drilling equipment, a family that starts a food truck to feed workers at fracking sites, and a man who starts as a real-estate agent to help new residents and businesses find property.

None of those jobs would be included in the Labor Department data used in the report.

(Full comparison of the differences between the Labor Department and the BEA data for each county can be found in the Appendix Data Table.)

The report’s assertions of a “lost decade” are not supported by the growth in personal income, either. Inflation-adjusted personal income went up by more than 10% in 17 of the 22 counties analyzed. The ORVI criticism is that the fracking counties did not keep pace with income or job growth compared to the U.S. as a whole. Since most of the fracking was taking place in remote rural counties that were economically stressed already, this is hardly surprising.

Perhaps a better comparison is to look at similar remote rural counties that did not enjoy the benefits of extensive fracking. The ORVI report did a bit of that analysis on its own (page 8), though you won’t find the results trumpeted in a press release: The report concluded that fracking counties experienced job growth, while their non-fracking neighbors suffered job losses.

Looking at neighboring counties in each of the three states helps illustrate that story. Columbiana County, OH; Fayette and Potter counties in PA; and Pleasants County, WV, are each adjacent to two of the 22 “Frackalachia” counties analyzed in the ORVI report.

All four suffered job losses, while seven of the eight neighboring “Frackalachia” counties either grew jobs or lost them at a slower rate.

On personal income, seven of the eight “Frackalachia” counties outperformed their neighbors, in one instance, by more than twice as much (Potter compared to Tioga.) Only Columbiana performed better than “Frackalachia” neighbor Jefferson, OH, in job and income growth.

That’s the kind of conclusion you jump to when you fail to count two-thirds of the net new jobs. 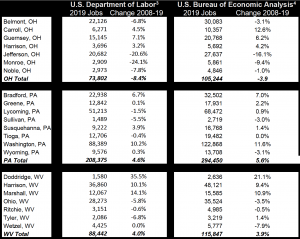 For a more detailed explanation about how the Commerce Department’s Bureau of Economic Analysis develops its county-level job estimates, including the exclusions from the Labor Department’s Quarterly Census of Employment and Wages, see this guidance from November 2020, particularly Section VIII, Employment: