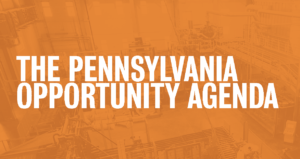 Pittsburgh Works, a coalition of businesses and unions, unveiled a proposal on Friday to renew Pennsylvania’s focus on manufacturing and energy as the drivers for the state’s economy.

The proposal, “The Pennsylvania Opportunity Agenda,” was released during a news conference by the organization that represents more than 100,000 workers across the state.

“Pennsylvanians want their elected leaders to take bold action to reverse decline and take advantage of a once in a generation opportunity to change course,” Executive Director Jeff Nobers said. “The Pennsylvania Opportunity Agenda is a concrete path forward to make Pennsylvania competitive economically.”

Nobers said a recent statewide survey had found that eight in 10 voters believe the state needs “to take bold action to grow our way out of the mess we are in.”

The plan focuses on building an improved business climate, implementing energy policies that provide environmental protection while assuring U.S. energy independence, improving access to vocational skills training, and promoting the region as an ideal location in the “new” economy.

Key specifics in the plan include reducing the corporate net income tax, creating state loans to offset costs of building on industrial sites, streamlining and improving the state’s permitting process, providing scholarships for skilled trades, stopping efforts to join the Regional Greenhouse Gas Initiative and supporting a hydrogen hub in the state.