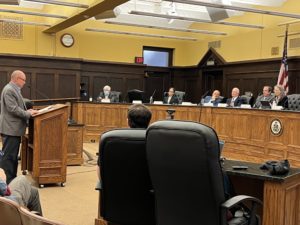 No one in this region should be happy with the proposed enforcement action taken by the Allegheny County Health Department to fine U.S. Steel $4.6 million for alleged uncontrolled push violations at the Clairton Coke Plant in which emissions were not captured by the control system.

According to the Health Department, the alleged “violations” occurred 831 times between January 2020 and March 2022. During that time, there were more than 500,000 pushing operations at the plant, meaning the emissions system worked as designed 99% of the time.

Reports of these incidents have been presented monthly to the Health Department by U.S. Steel since 1990.

Now suddenly, they constitute a major violation of the plant’s operating permit. That is the textbook definition of arbitrary and capricious.

If the Health Department, without warning, can reach back years to reclassify rare incidents that have occurred for decades as technical violations that are the basis for a multi-million dollar fine, then no business in Allegheny County, especially a complex manufacturing plant, is safe from being wiped out by government whim.

Rather than working with companies to find environmentally safe and sustainable ways to conduct business and build an economy, regulators in Allegheny County and the state seem intent on helping drive manufacturing out of business here.

The Mon Valley Works, including the Clairton coke plant, employs 3,000 people directly with roughly a quarter of them coming from the economically distressed communities of the valley, such as Braddock, Glassport, and Clairton itself. The plant supports thousands more jobs throughout the regional economy.  A shutdown of US Steel would be devastating to the employees of US Steel and their families and to the Mon Valley communities where the company operates as their tax bases would be greatly reduced.  In turn, this would pout essential services such as police, fire and EMS in these communities in peril.

Even environmental activists cold-hearted enough to welcome such a development should not be happy with the proposed enforcement action.  According to the Health Department’s own press release, the department had reports of the so-called “violations” dating back to 2020.

If they were in fact, violations, then for two years the Health Department sat on its hands and did nothing as each so-called violation occurred again and again.

It didn’t tell U.S. Steel to improve. It didn’t warn the public about this supposed hazard.

Why? It seems like an odd way to supposedly protect the public health. But it seems like a good way to add millions to its budget while punishing a company that’s too “dirty” for some.