Pittsburgh Works Together commends the Allegheny County Council Committee on Sustainability & Green Initiatives interest in understanding more fully the true picture of the county’s air quality. It should not be demonized as among the worst in the country, as headlines and some environmental activists may assert. As our organization demonstrated in the February 2021 report Clearing the Air and as 2020 EPA data confirms, the region’s air is fairly typical for a large metropolitan area.

EPA Data for 2020: This graph compares the worst PM2.5 annual reading from an Allegheny County monitor in 2020 (9.8 micrograms per cubic meter) compared to the worst reading in each of the urban core counties from the benchmark regions in the Pittsburgh Quarterly/Pittsburgh Today regional indicators project. We’re #7 out of 16, between the tech meccas of Seattle and Austin. 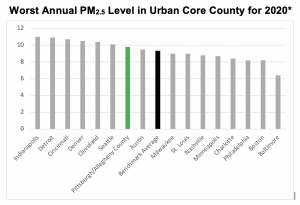 And Allegheny County’s air quality improvements are not a pandemic-related phenomenon as some suggest. A decade ago, the countywide average was barely meeting the EPA standard for annual PM2.5 levels (12 micrograms per cubic meter), with multiple monitors exceeding the standard.

The countywide average is now 24% lower than it was in 2011**. The chart below shows the decline over the past five years. No Allegheny County PM2.5 monitor measured above the EPA standard in 2020, and the county was in compliance with all EPA standards in 2020 for the first time in history.

**Design value = three-year rolling average. Because of data reporting limitations,
not every site has a design value for every year.

Asthma in Allegheny County: Dr. Deborah Gentile is expected to discuss her study examining asthma rates among children living near pollution emission sites. The study, covering data collected from 2014-2016, was published last year in the Journal of Asthma. The report, in our opinion has several issues, including that it is based on air conditions that no longer exist in Allegheny County.

The Gentile study estimated that 22.5% of children in schools near pollution sources had asthma, as compared to a CDC estimate for all U.S. schoolchildren of 8.3%. But that CDC estimate includes more than just children living in a dense, urban, highly developed area. And in fact, the Gentile study says Pittsburgh’s estimated 22.5% rate is “similar to rates reported in other studies of underserved children from different U.S. cities,” specifically Philadelphia, Chicago, New York, and Los Angeles.

Childhood asthma is a serious problem and understanding what can be done to combat it is important. In the Gentile study, children exposed to secondhand smoke were estimated to have a higher occurrence of asthma than those exposed to any particular pollutant. Estimated asthma rates among obese children (heavier than 95% of the age cohort) were even higher than for secondhand smoke, though the study says the margin of error was so large that obesity may not be statistically significant.

“Surprisingly, SHS (secondhand smoke) was not associated with an increased prevalence of asthma after adjustment for other contributory factors. This is in contrast to the results from many studies demonstrating an association between SHS and asthma outcomes.” The study speculates that impact of outdoor air pollution may have been so strong that it overwhelmed other factors, including secondhand smoke.

The Speakers: Scheduled to address the council committee are Dr. Gentile, medical director for Community Partners in Asthma Care; John Graham, Ph.D., senior scientist for the Clean Air Task Force; and Albert Presto, Ph.D., associate research professor of mechanical engineering at Carnegie Mellon University. The environmental activist groups Breathe Project and Group Against Smog and Pollution (GASP) described the committee session as “the first in a series this year providing an update on air quality in Allegheny County from the perspective of independent scientists and researchers.”

The speakers, as well as the groups promoting their appearance before the Allegheny County Council, have one tie in common: They are all beneficiaries of funding from the Heinz Endowments.

Providing financial support to academics, environmental scientists, and advocacy groups is not a bad thing. But it is important to remember that everybody brings a perspective to the table, including Pittsburgh Works. We believe manufacturing, energy, construction, and other industries are necessary to support an economy and a society that provides sustainable opportunities to all segments of the population, not just those with advanced college degrees. And we work to put facts in front of policymakers and the general public so that we can make balanced decisions that best address both environmental stewardship and a growing economy.