Research Brief - PA is Missing Out on the Electric Vehicle Supply Chain: One picture tells the story

Research Brief
PA is Missing Out on the Electric Vehicle Supply Chain:
One picture tells the story

“U.S. capacity additions were sporadic until recently when the pace of new announcements picked up,” according to the report. “Six new facilities, worth more than $5 billion, were announced from 2018 to 2020. Since the start of 2021, more than 15 new facilities or expansions have been disclosed in the U.S., reflecting a potential investment of at least $40 billion. Several plants have also been announced in Canada.”

The report says that “most of the newly announced gigafactories will be in the same geographical region, an area some have begun referring to as the “Battery Belt,” and included this map: 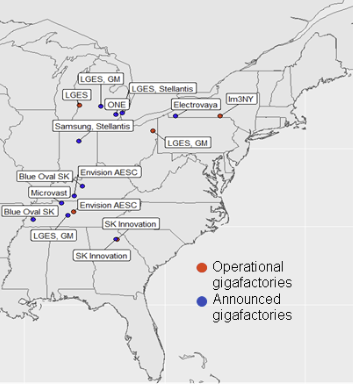 For a printer friendly version of this research brief, click here.

Pittsburgh Works Together is a business-organized labor-workforce-economic development alliance working to grow jobs and expand the industries that are the foundation of our economy, including energy, manufacturing, and construction, in order to provide opportunity for all Pennsylvania residents.