View the printable version of the research brief here.

The Ohio River Valley Institute took to the national stage last month to promote Lewis County in Washington State as a model of how transitioning to “the emerging clean energy economy” is better than relying on dirty old fossil fuels.

There’s just one problem that ORVI’s research missed: The economies in 40% of the fossil-fuel counties they were using as a comparison outperformed Lewis on key measures during the period of its supposed success.

We have highlighted the shortcomings of ORVI’s research before. The institute’s first research report tried to show that fracking had minimal economic impact on the counties where it takes place. Except that ORVI specifically chose a dataset that undercounts jobs after first claiming otherwise. And the original report was rife with so many data errors, ORVI had to retract the original and issue a corrected version after Pittsburgh Works Together pointed out the problems.

The institute was back at it at a U.S. Department of Energy public meeting last month. Here is a key slide that ORVI senior researcher Sean O’Leary presented to the DOE’s Understanding the Impact of Ethane DevelopmentAug. 24 session: 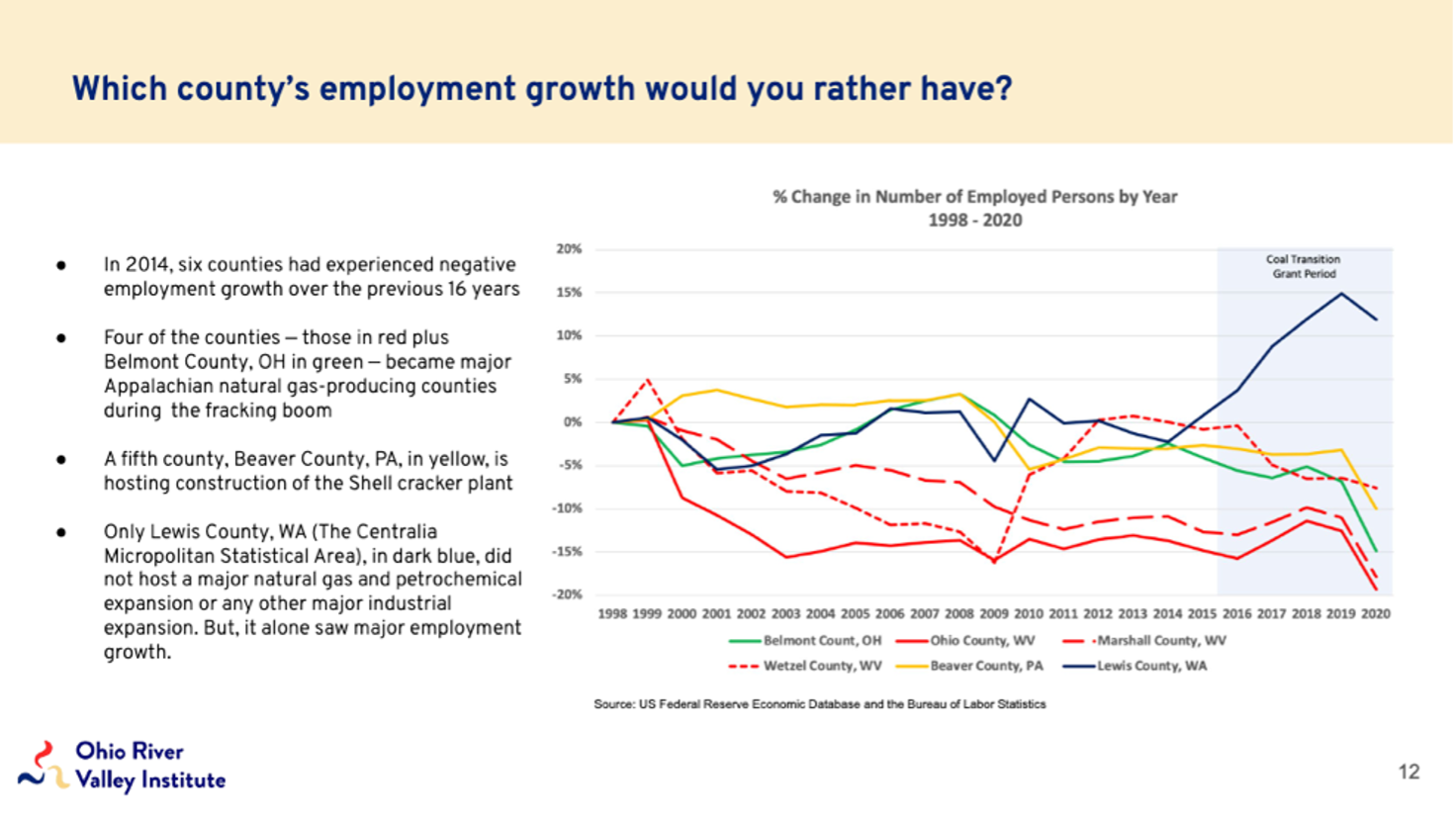 You would be forgiven for thinking that the slide showed that the five “fossil-fuel counties” in PA, OH, and WV all lost jobs by 2019, while only Lewis County grew jobs after it replaced coal with the clean-energy economy. 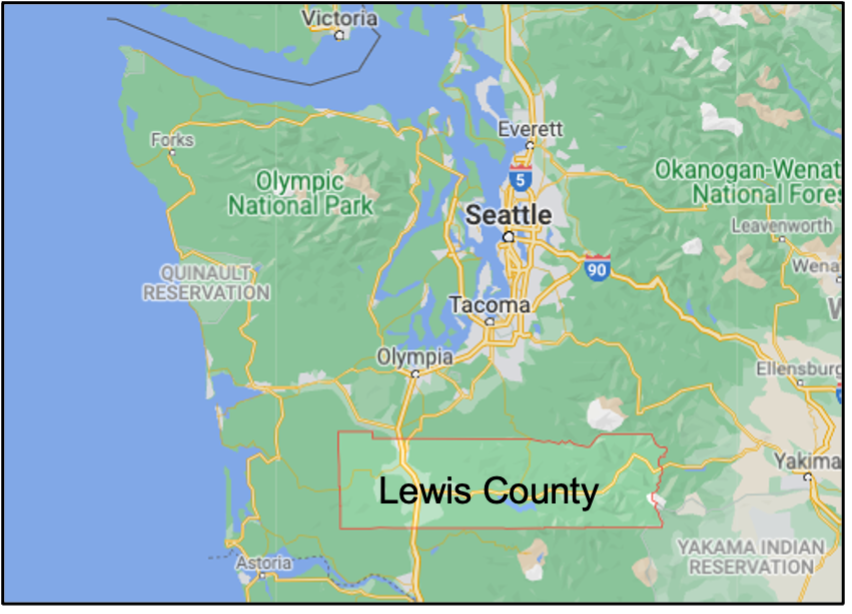 That is not the case.

The slide’s first bullet point claims that all six counties “experienced negative employment growth” between 1998 and 2014. That is categorically incorrect, according to the Bureau of Labor Statistics data cited as the source.

Four of the six counties had more jobs in 2014 than 1998 – every single one of the counties that ORVI described as “major Appalachian natural-gas producing counties during the fracking boom.”

The BLS defines “employment” as jobs within a county. The graph displays “Employed Persons,” which is the number of people living in a county who are working. That is related to, but different from, jobs in a community. And it is dependent on many factors, such as population growth and the age of the population.

ORVI fails once more in the final bullet point where it tries to prove its argument that natural gas and petrochemicals don’t help the communities in which they’re located. It claimed that only Lewis County, which did not participate in those industries, “alone saw major employment growth.”

ORVI wants to promote Lewis County as a model for a transition away from fossil fuels. The county had a coal mine that employed 600 before it closed in 2006 and its coal-fired power plant is scheduled to shut down in 2025, eliminating hundreds more jobs.

The owner of the two sites, TransAlta Corporation, agreed to provide $55 million over 10 years to fund various energy programs as part of the transition:

From the time the grant programs started in 2016 until the end of 2019, according to the ORVI material presented to the DOE, Lewis County had GDP growth, job growth, and wage growth higher than the national average “as a result” of the programs.

However, the ORVI research failed to compare the Lewis County performance to economic benchmarks from its home state of Washington. Or to any of the target counties where supposedly, according to ORVI, “natural gas and petrochemicals are structurally incapable of delivering significant job growth.”

In fact, Marshall County WV produced more jobs during those four years than Lewis did, grew wages twice as fast as Lewis, and in 2019, had average weekly wages that were 50% higher than Lewis.

The 2016-2019 performance by Beaver and Marshall is even more impressive when you look at the areas where the counties are located. Lewis County produced the most jobs, but only slightly outperformed Washington and the adjacent Seattle metro area. And its wage growth was far behind the state’s benchmark of 22.8%.

Marshall, on the other hand, grew its jobs while the rest of West Virginia was losing them. And its wage growth was three times higher than the state average.

Beaver County’s story is similar. It grew jobs at twice the average of the rest of Pennsylvania and grew wages at more than twice the state rate. Perhaps a multi-billion-dollar industrial infrastructure project can lead to economic growth and vitality.

The ORVI report The Centralia Model for Economic Transition in Distressed Communities concedes that “the scale of the economic turnaround in Centralia is probably too great to be solely attributable to the grant program.”

Here’s one alternative explanation that might explain Lewis County’s economic improvement: Spillover from the growth and prosperity in the adjacent Seattle metro area, whose population has grown by more than 30% since 2000 (compared to a drop of almost 5% for the Pittsburgh region).

Lewis’s job growth in 2016 through 2019 coincides with explosive growth in housing costs in the Seattle metropolitan statistical area. Between early 2014 and the end of 2019, the metro area’s average housing price went up 61%.

Census data show that migration from the Seattle area into Lewis County increased over that period, as did migration from other states, perhaps fueled by people attracted to Seattle’s charms but looking for a more affordable alternative. The ORVI’s Lewis County report notes that more than 45% of the county’s GDP increase from 2016-2019 came from the real estate industry.

Or perhaps ORVI is correct: That an average of $5.5 million in clean energy grants per year – in a county where the total annual payroll is $1 billion – was responsible for the creation of thousands of jobs.

Different communities can pursue different paths forward to provide the best opportunity for their residents. Pittsburgh Works believes that supporting traditional industries – including energy and natural gas production and petrochemical manufacturing – alongside emerging technology companies is the best way to provide opportunities for sustainable prosperity for all segments of the population of our region.

Others, of course, can have a different perspective. But the debates need to be based on facts and analysis, not one-sided wishful thinking. These issues are too important.