Pennsylvania has some of the most inexpensive electricity in this part of the country, but that could change if the state joins the Regional Greenhouse Gas Initiative.

Pennsylvania’s average electricity price is 9.81 cents/kilowatt hour (kWh), about 7% below the U.S. average.

The picture for the Regional Greenhouse Gas Initiative (RGGI) states is much different. Connecticut, one of 11 RGGI states, has the highest electricity prices in the continental U.S., according to the Energy Information Administration.

Looking at the most expensive states in the continental U.S., RGGI states fill the top four slots and eight of the top ten.

The only RGGI state that has lower electricity prices is Virginia – which joined RGGI in 2020 and has been subject to the group’s penalty for producing electricity with fossil fuel for less than a year. 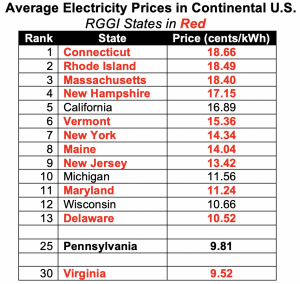 At a time when the Commonwealth is trying to rebuild after facing the pandemic and increased competition, RGGI would strike at one of the state’s genuine economic advantages. RGGI states have seen their electricity prices rise three times faster than Pennsylvania’s.

RGGI requires electricity generators who use fossil fuel to pay a new charge for each ton of carbon they produce. The Wolf administration’s plan is to use the proceeds to invest in renewable energy, energy efficiency improvements, and other projects.

At the same time, the DEP’s economic analysis predicts that the impact of joining RGGI will be so small as to be almost impossible to measure. It estimates that cumulative disposal personal income in the state from 2022-2030 will decrease by .02% compared to not joining RGGI. The analysis also predicts that the state’s gross domestic product will increase by a cumulative .03%.[2]

And what would Pennsylvania’s joining RGGI do for carbon emissions if all goes according to Gov. Wolf’s plan? It would reduce the country’s greenhouse gas emissions by between 1/1000 and 3/1000 annually.[4]

Below is a printable version of the research brief.