Overwhelmingly Want “All the Above” Energy Production

The poll also shows voters across the political spectrum want policies that drive economic growth and job creation, including an “all-of-the-above” energy strategy and other elements of the Pittsburgh Works Opportunity Agenda.

“Republican and Democratic voters can’t agree that the sky is blue, so when they overwhelmingly agree that a diverse portfolio is needed for reliable and affordable energy, and nine-of-ten believe that Pennsylvania should be rebuilding its manufacturing base, politicians across the spectrum and around the country should take serious notice,” said Pittsburgh Works Executive Director, Jeff Nobers.

“We hope, and we expect, that all candidates will focus on the issues this poll shows voters overwhelmingly support: a focus on economic development, job training and the need for an ‘all the above’ energy approach that includes natural gas, nuclear, and wind and solar,” he said.

The new poll's key takeaways include:

“Voters are clear: business as usual won’t cut it anymore. If we don’t grow Pennsylvania’s economy, communities will continue to lose population and we won’t have the resources to address health care, education, public safety and quality of life issues,” Nobers said. “Pennsylvania has the location, the resources and the workforce to rebuild America’s manufacturing. Now what we need is the leadership in Harrisburg and Washington, DC.”

The poll of 600 registered Pennsylvania voters was sponsored by Pittsburgh Works Together and conducted by Public Opinion Strategies from August 7th to 10th with a margin of error of +/- 4.0%. A similar poll was conducted in February 2022 and comparisons with the earlier poll are included in the table below. 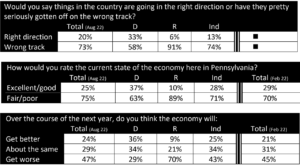 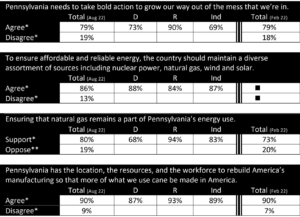 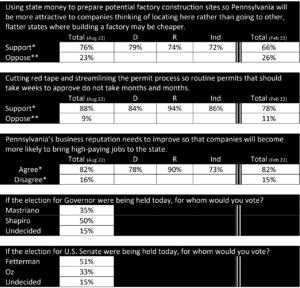 Pittsburgh Works Together is an alliance of corporate, organized labor, economic development, and workforce leaders whose goal is to build an economy that works for everybody. Pittsburgh Works is committed to an inclusive economy that respects traditional industries, including manufacturing, energy, and construction, alongside emerging ones, all while ensuring a sustainable environment.
Contact: Ken Zapinski | 412-352-4364 | ken@pghworks.com