PITTSBURGH – Pittsburgh Works Together praised PennEnvironment's new findings about air quality in the Pittsburgh region which show it is improving significantly and is better than in most other major metro regions.

According to PennEnvironment's new report, Trouble in the Air, the Pittsburgh region had 57 days with elevated levels of ozone and/or particulate matter in 2020, down from 90 days in 2018 and 121 in 2016.

That placed the region 27 out of the 50 largest metro regions in the U.S.  San Diego was the top (or worst) region, with 232 days in 2020 when PennEnvironment considered ozone and particulate matter levels to be elevated. 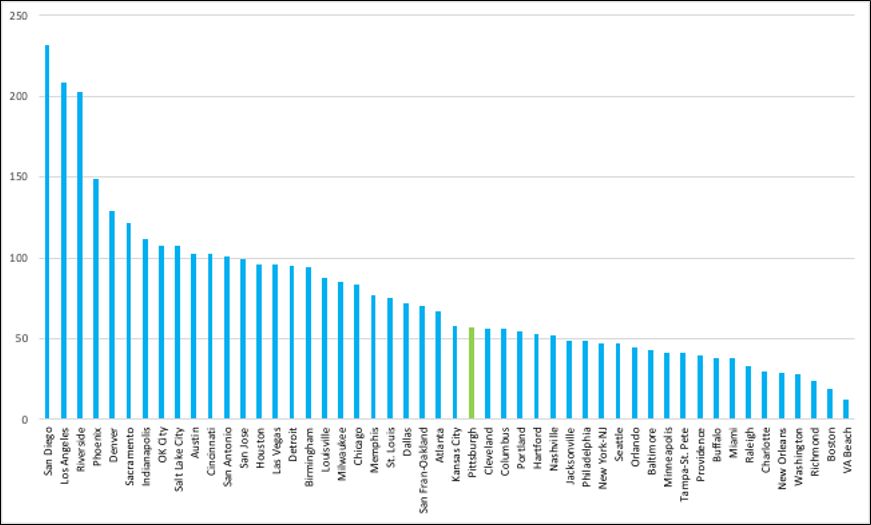 *As judged by PennEnvironment, Trouble in the Air, Fall 2021

"The report confirms the earlier findings by Pittsburgh Works Together in our Clearing The Air report (https://pghworks.com/clearing-the-air/), which documented that our air is improving and pretty typical of other big-city regions," said executive director Jeff Nobers.

“We still see significant problems with the PennEnvironment analysis, which we believe overstates air quality issues even when our air is within EPA standards. But it is far more accurate and fair-minded than the questionable air report produced each year by the American Lung Association which despite mounting evidence to the contrary continually concludes that we have some of the worst air in the country,” Nobers said.  “This is not to say our air is perfect.  We certainly believe we need to keep working on continual improvement, but we should do this from a basis of fact not fiction.”

The PennEnvironment report is based on the EPA’s daily Air Quality Index (AQI) which is intended to translate technical scientific measurements of parts per million into a simple scoring system that is easier for the general public to understand.

The AQI scale starts at 0 and any score 100 or below complies with federal Clean Air Act standards. The EPA considers AQI scores between 51 and 100 as “moderate” and “acceptable.” PennEnvironment, however, counts them as “elevated” for the purposes of its report.

PennEnvironment determines that a region has an “elevated” day when a majority of its air monitors register 51 or higher. The American Lung Association, in contrast, describes an entire region’s air quality based on the readings of its single worst monitor.

Both suffer from the same flaw: They ignore compliance with federal Clean Air Act standards and consider air that meets those standards as a problem.

Even using the PennEnvironment methodology, the air across Pennsylvania has improved significantly, though you wouldn’t know that if you only read the 2020 report. PennEnvironment highlighted 10 areas in the state, including Pittsburgh and Philadelphia, that it considered problematic.

PennEnvironment’s data show that the number of “elevated” pollution days in those 10 regions dropped by 45% between its 2016 report and its 2020 report.

Surprisingly, the environmental group did not highlight this improvement. Instead, it issued a media release saying, “Millions of Pennsylvanians experienced frequent unhealthy air in 2020.” For some reason, it did not see the need to say that the frequency had dropped by almost half over the past few years.

Ideas for Rebuilding Pennsylvania's Manufacturing Base