“Every year that the American Lung Association releases its flawed findings, we will continue to release the facts to set the record straight,” said Jeff Nobers, executive director of Pittsburgh Works Together, a coalition of labor unions, businesses and civic leaders. “Every year, the people of southwestern Pennsylvania read and hear the same, tired scare tactics. You cannot solve problems when you don’t deal in facts.”

Allegheny County and the entire Pittsburgh region met federal air quality standards for tiny pollutant particles (PM2.5) and ozone for 2018-2020, the period covered by the ALA’s new State of the Air report to be released tomorrow.

Yet the Lung Association tries to portray the region as having some of the worst air in the country, a finding that is contradicted by data in its own report.

Among other issues with the ALA’s approach:

Editor's Note: The ALA selectively releases its report to news outlets under confidentiality terms, so critics do not have the opportunity to review and analyze the data and findings before they are publicized by the media. This is written based on the EPA data sets and methodology that the ALA has used in its previous State of the Air reports.

The flaws in the ALA’s approach are most obvious in the report’s discussion of daily levels of PM2.5 pollution. It thinks a 12-county Pittsburgh metro region that covers parts of three states is a “city” and is one of the “25 U.S. Cities Most Polluted by Short-Term Particle Pollution.” 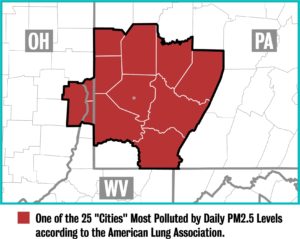 But the report’s own data don’t back up that conclusion.

The report’s analysis concludes that six of the 12 counties are among the select group of the “Cleanest Counties for Short-Term Particle Pollution” in the U.S.: Armstrong, Fayette, Washington, Westmoreland, Jefferson OH, and Hancock WV. The ALA had no data for three of the other counties (Butler, Indiana, Lawrence.) 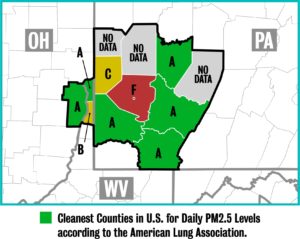 Together, those nine counties represent 82% of the land area in the ALA’s so-called “city” of Pittsburgh. Not one of them reported a single day in 2018, 2019, or 2020 in which the PM2.5 levels reached levels that the EPA considers to be “unhealthy.”

Such is the state of the air in what the American Lung Associations considers one of the most polluted “cities” in the country.

“The ALA’s distortions encourage extremists who will only be happy when the region’s industries are shut down and all cars and trucks are banned from our streets,” Nobers said.

“Reports like the ALA study create an even more divisive battle of ideology and move us further from viable solutions.”

The Post-Gazette, in the 2015 editorial quoted earlier, put it this way:

“The American Lung Association has the ability to convey air quality data with more accuracy and sophistication. Yet it refuses, favoring instead annual reports that alarm and deceive. Talk about a pollution source in need of cleanup.”

Pittsburgh Works Together is an organized labor-business-civic alliance focused on creating a diversified economy that provides sustainable prosperity and genuine opportunity for all residents of the Commonwealth.